Turin mourned this summer. Twenty five years had passed, fans had protested vehemently, but with a deft display of boardroom defiance, the Little Prince was gone.

Claudio Marchisio was Juve born and bred. Before player, he was pupil, before pupil, ball-boy and before it all, he was a fan. His prolonged loyalty had warranted royal ascension, dubbed Il Principino (The Little Prince) by the bianconeri faithful. Princely he may have been, but social media metrics were king and the 316,000 ‘likes’ and 14,000 comments on his farewell Instagram post were telling of the sentiment harboured towards a man who had given a quarter of a century’s service to the cause.

The Little Prince had been a loyal servant to the Old Lady, a reminder that the local lad could still stand above the noise of a crowded game to wear the famous black and white with a pride matched only by the thousands in the terraces.

Stand though he did, by the end he cut a solitary figure, a reminder of a bygone time in a sport that had long left loyalty behind. It wasn’t always like this though. Once upon a time the one club men ruled, but who were these players and what does their absence say about the state of the modern game?

Wednesday 23rd November 1983 and Graham Taylor had a problem. With Sparta Prague hours from arrival at Vicarage Road, the Watford manager faced a selection headache with a host of first team stars unavailable. Step forward Nigel Gibbs, an academy graduate and Watford through and through.

“The manager always knew just how to speak to players, he was so good with that. I remember he approached me on the morning of the game and asked, so calmly, “What are you doing this evening son? Do you fancy it?” Through his unassuming approach Taylor intended to minimise the gravity of the situation at hand. Signed at twelve with an apprenticeship following four years later, the time had now come for Gibbs’ first team debut.

After an afternoon of intense butterflies, the young defender impressed in front of over 15,000, packed into a floodlit Vicarage Road. It was quite a present for a boyhood fan who had celebrated his 18th birthday days earlier. Even better for Gibbs, it was just the start. 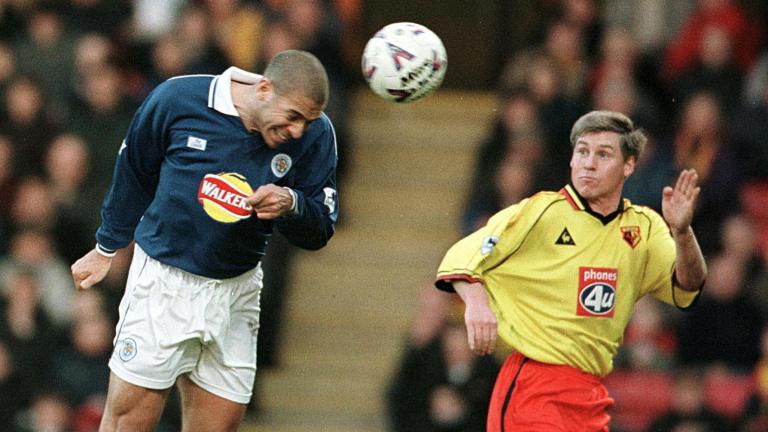 Under Taylor the right-back excelled as the Hornets flew to new heights, with a club record second place top-division finish in his inaugural season in the first team. Big wins against neighbours Arsenal, Chelsea and Tottenham followed, though Gibbs laughs off suggestions that this made the Hertfordshire club kings of London.

Then, the bubble burst. Taylor’s departure to Aston Villa in 1987 stung Watford, with relegation the ultimate outcome. Gibbs weathered the storm, refusing to depart despite the low tide and eventually helped the team back into the top division, this time as captain. The club’s longest-serving player concludes with conviction: “All I wanted to do was play for my boyhood club”.

Undoubtedly, there’s something particularly special about representing a club with whom adolescent allegiance was forged. Dane Whitehouse will tell you that. Between 1989-2000 he made over 200 appearances for Sheffield United and cherished every moment, a local lad born practically beneath the roaming shadows of Bramall Lane.

Of course, goals against the fiercest of city rivals live longest in the memory (Whitehouse scored home and away against the Owls in 1991/1992). “Scoring against Wednesday was one of the best feelings I ever had in football. They weren’t screamers, just tap-ins, but they meant so much to me personally, to my family and friends”. It wasn’t just his United supporting acquaintances that took delight either. In a city so often fractured along footballing lines, even the blue contingent took satisfaction in a fellow Yorkshireman coming good. “Even Wednesday fans who I grew up with couldn’t wait to congratulate me”.

You see, for those closest to Whitehouse, football wasn’t just a game and the Owls and Blades were so much more than merely teams. Rather, they were a source of sanctuary from the social shortcomings that plagued the steel city. “I had done what most fans dream of. Growing up, scoring in a derby for the team I supported. Coming from a deprived area of Sheffield, football with my mates, United or Wednesday was all we had”.

Speaking with Whitehouse, as with Gibbs, mention of the fans is never far away and you get a sense of the special bond that both enjoyed. From Whitehouse’s debut, when he was amazed by the reception a travelling contingent offered him, “a nervous kid”, at Blackpool’s Bloomfield Road, right through to the present day, as he still attends most home games, sharing a pint and chat with Blades supporters. They were another driving force that kept Whitehouse gravitated towards the club – despite reports of big money bids, including a rumoured £1.5 million from an unnamed club. “I never considered leaving United. I was enjoying my football and the fans were amazing to me. The only way I would have left the club was if I was no longer wanted in the team”.

The likes of Whitehouse and Gibbs aside, boyhood support isn’t the sole determinate of devotion. Sometimes, when a club extends a lifeline, offering a chance when hope seemed lost, they are repaid with total commitment to the cause. For Keith Ryan at Wycombe Wanderers, this came thanks to family ties.

“My cousin (Steve Whitby) was scouted by Wycombe following an FA Cup game and I used to give him lifts to training when he played for the reserve team. After watching training, I saw there wasn’t much of a difference and thought I was good enough for that level. Eventually I asked for a trial, which the club agreed to. I think what impressed them the most was my sheer work-rate and attitude. They signed me, but there was still a long, long way to go.”

Ryan remained in the reserve team for a few years before eventually receiving the call-up to the first team. “I was lucky, in those days not all clubs had a link between the first and second team, but Wycombe did. One of the coaches, Jim Melbin, recommended me to the first team manager and I started to become involved with the first team from then”. The Wycombe manager in question shared similarities with Ryan. He was young and hungry to prove himself, “a real winner”, Ryan remembers. His name was Martin O’Neill.

The pair helped the club achieve an unprecedented period of success, with Ryan earning the nickname ‘Rhino’ from fans thanks to his tireless work-rate. Complimenting this industry were a dressing-room of likeminded cohorts. As Ryan puts it, “a bunch of determined, single minded lads. We were riding the crest of a wave and we didn’t know where it was going to end”. 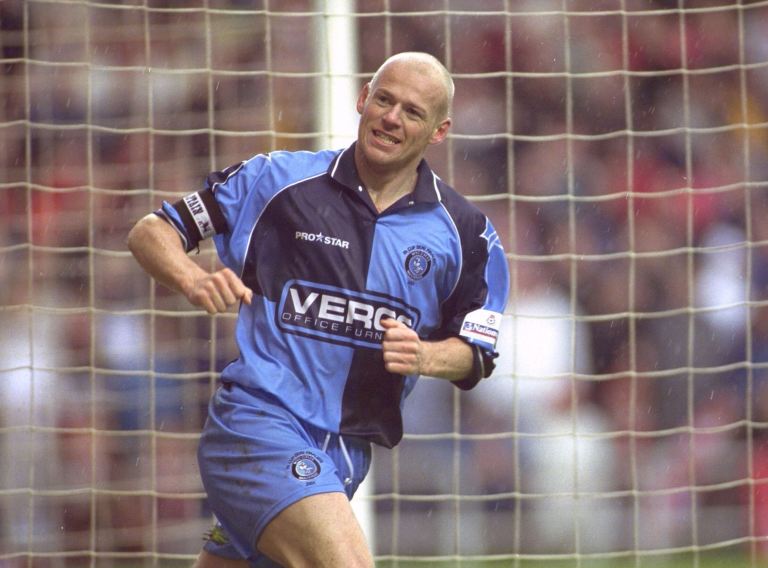 The wave saw them record three victories in finals at Wembley and promotions from the Conference all the way to Division Two. To this day, Ryan remains synonymous with the success, with one Wycombe fansite summarising, “Wycombe fans were spoilt with success in the 1990s and Rhino was there all the way”.

He was there too as Wycombe fought their way to the FA Cup semi-final in 2001, beating top-flight Leicester City, as well as Wolves, Grimsby Town and Wimbledon along the way. There they faced Liverpool, who would end the season with a treble of cup trophies. Despite a 2-1 loss, with Ryan scoring the consolation, he takes pride. “We gave them a right go” he remembers, before poetically concluding, “then a young player by the name of Steven Gerrard was subbed on. He had an aura about him. When he came on, established Premier League players stepped aside, knowing that he would win the game for them”.

Despite success, Ryan is frank and honest, recalling two opportunities he had to play higher up the football league, reportedly with Leicester City and Aston Villa. The competitor within him shines through as he admits he’d have done whatever it took to play at as high a level and be as good a player as he could be. As so often happens in football, the moves fell through and Ryan is at peace with that: “No regrets”.

But what about non-league, where remuneration is smaller but precious and the promises paper thin?

Lee Robinson is well known in south coast footballing circles. By weekday he is a draughtsman, but on Saturday afternoons he applies a similarly acute eye as a striker for Newhaven FC. He’s scored over 330 goals for the club, finding the net more than 60 times in each of the past two seasons. His rapid speed is complimented by clinical finishing ability. He is prolific and heavily sought-after, but most importantly to the Dockers faithful, he’s happy where he is.

Like Ryan, Robinson’s time at Newhaven has coincided with an unprecedented period of success, his goals a catalyst, with multiple promotions and cup wins. In a world where free-scoring strikers are gold dust and clubs stand on considerably uneven financial footing (just ask his brother, Jake, at Billericay Town), has he ever been tempted to see whether another pitch’s grass may be greener?

“There have been a couple of approaches over the years, one from the same league and another from the league above, but nothing has tempted me enough to leave. Money has never motivated me really, especially in football and at this stage, and after so long at the club, it would have to be an exceptional offer for me to consider moving on”. 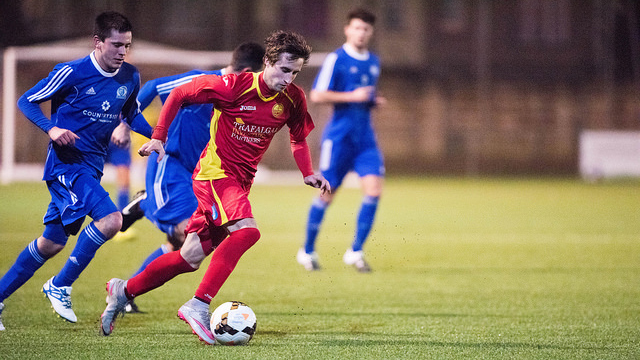 Not content with simply scoring on the pitch, Robinson also plays a big role off it, with the printing of match-day programmes and running of the club’s social media accounts falling under his remit. He juggles this with helping to manage the under 18 squad. Tying it all together is a deep respect for the club’s first team managers, Andy Cook and Sean Breach. “They’ve been brilliant since they took over”, he admits, “and if an offer ever did come in from another team, I’d discuss it first with them out of courtesy”. Robinson is a credit to his club.

The likes of Robinson, Ryan, Whitehouse and Gibbs are a world away from the often fickle reality of modern football. When quizzed as to what caused the goalposts to shift, their answers are varied and wide-ranging, indicative of a concoction of causes that have ruled the one club men virtually extinct.

“It’s so easy to get a transfer these days” says Gibbs. “The Bosman rule completely changed things, taking the power away from the club and handing it to the player. Before that, players would bite your hand off for a contract”. Robinson and Whitehouse, meanwhile, cite the massive amount of money that’s transformed a sport into a business and players into assets who are traded at will. Along the same lines, Ryan identifies the influence of modern agents, questioning whose interests they serve – the players they represent, or their own.

Talking to the four players though, another trend emerges. As the domestic game has grown and television has made it increasingly accessible to the rest of the world, it has lost a local edge that previously bred rapport – with fans, staff and teams. The popularity of the English game has led to its globalisation, with one of the pillars that defined it left behind. It is a shame. Will we ever see the like of them again?